This week I decided that it was time to think up an alternate use for all the beer bottle caps I have lying around.  Normally, I make them into coasters for my Etsy shop.

But I have a LOT of bottle caps, and sometimes I feel like I should find new things to do with them.  I’d seen picture frames online before that were covered in smashed bottle caps, so I figured I’d try my own.  But I wasn’t really feeling the whole picture frame thing.  Then, while wandering around Michaels, I spotted these jumbo wooden alphabet letters, and I knew they would look really cool covered in bottle caps! 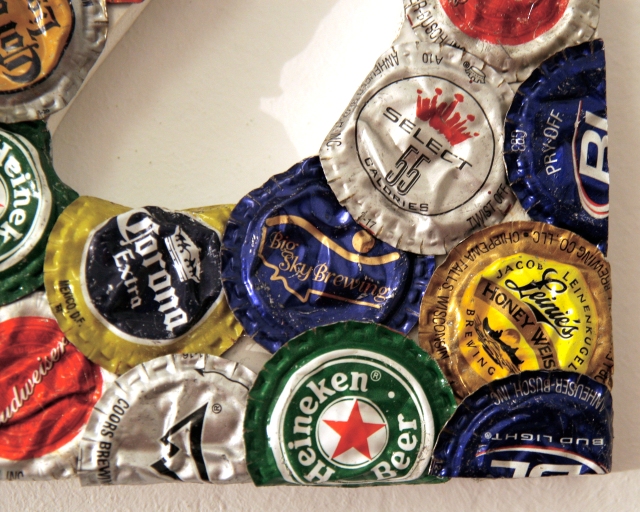 Many hours of tough work later, and I’m pretty happy with the results, but my dreams of offering custom alphabet letters through Etsy is pretty much squashed like these bottle caps, because I’d have to charge way more than people would be willing to pay, just to offset the amount of work each letter takes!

But, all the work was probably worth it, because it looks pretty awesome decorating my bookshelf!!

That’s all for now, but come back tomorrow for the start of my ‘Rescued from the Curb’ series showcasing home decor I have personally rescued from the NYC garbage trucks, and given new life.